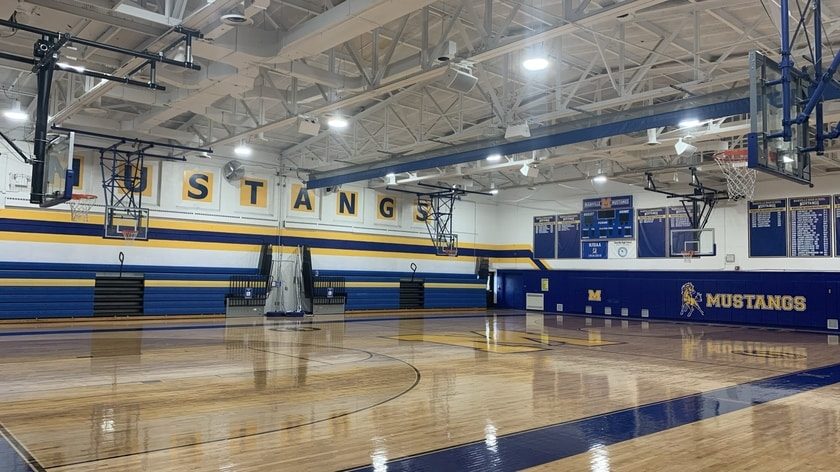 Manville High School, located in Manville, NJ needed a new gym sound system that could handle high speech and music levels, and provide clear sound for the entire space.  The school had several sound systems installed over the years, which did not work well in the space.

Our commercial audio-video design team took laser measurements of the gymnasium to create a 3D model for a loudspeaker layout.  We took into account coverage for the floor and court, as well as the bleachers.  When designing a gymnasium sound system, we also consider the acoustics and mounting points.  We came up with a layout of loudspeakers to provide coverage for both sets of bleachers, and the floor so everyone could hear clearly.  The school needed a simple interface, so we provided an 8″ touch screen with a custom layout to control the microphones and music.  We also programmed the building PA into the system, so when announcements are made, the system will lower the audio so everyone can hear.

The new sound system provides even coverage, great sound quality and is extremely easy to use.  Regardless of where you are seated or standing, you have crystal clear audio.

Learn more about our athletic venue projects, learn about our process, or meet our team.

Contact us to schedule a free consultation for your project.

Primal Restaurant Cape May opened in 2021 on the beach in downtown Cape May, NJ.  They needed a new sound system for their restaurant that would provide good audio levels throughout the seating areas, as well as the main front and back beach entrance.  The outdoor loudspeakers had to be able to withstand the salt air and direct exposure to the elements.

Our design team took a floor plan of the space to create an ideal restaurant sound system layout with loudspeakers in various zones for the best coverage.  We selected a series from JBL which have good full-range sound, even at low levels.  Local volume controls allow the staff to easily adjust the levels as needed.

The new restaurant sound system is easy to use and sounds great.  Guests can enjoy nice background music without having to talk over the audio.

Check out our other hospitality solutions.

The Absegami High School gym sound system was comprised of older loudspeakers and amplifiers which had some issues and were not working well.  Recently, they had some small paging loudspeakers installed hoping to provide better sound, but that did not solve their issue.  We were contacted to help them upgrade the existing sound system in phases.  They needed better sound, coverage on the floor/court since the existing system did not have any loudspeakers for this area, and local connection inside the gymnasium. 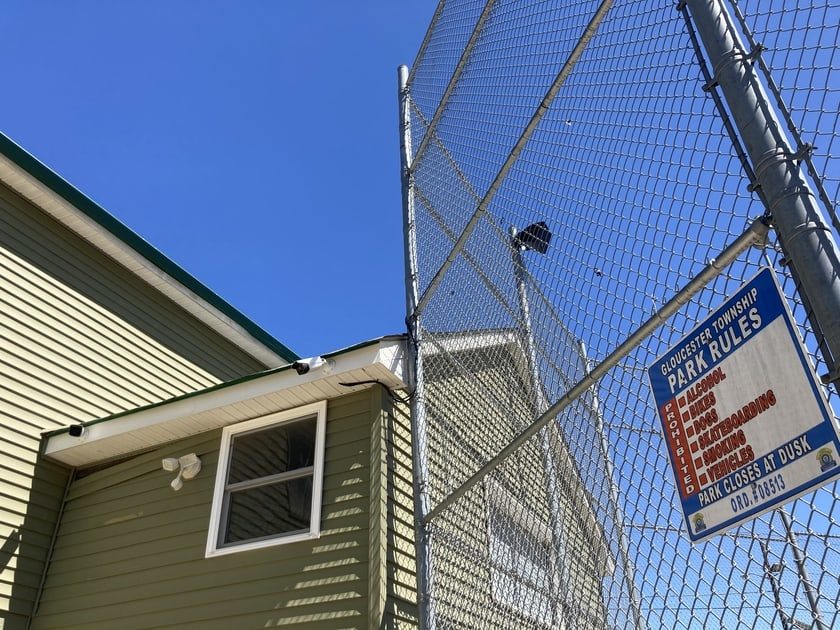 Our team reviewed the areas that needed sound coverage and the possible mounting points.  The backstop was the ideal choice as it allowed us to aim the new PA speakers down the 1st and 3rd base side and onto the field.  We selected the JBL AWC-series speakers due to sound quality and reliability.

The new outdoor PA system sounds great and provides coverage for the fans and athletes.  The system is easy to control and is a huge improvement over the old components.

Learn more about our sound systems as well as baseball field speakers and options. 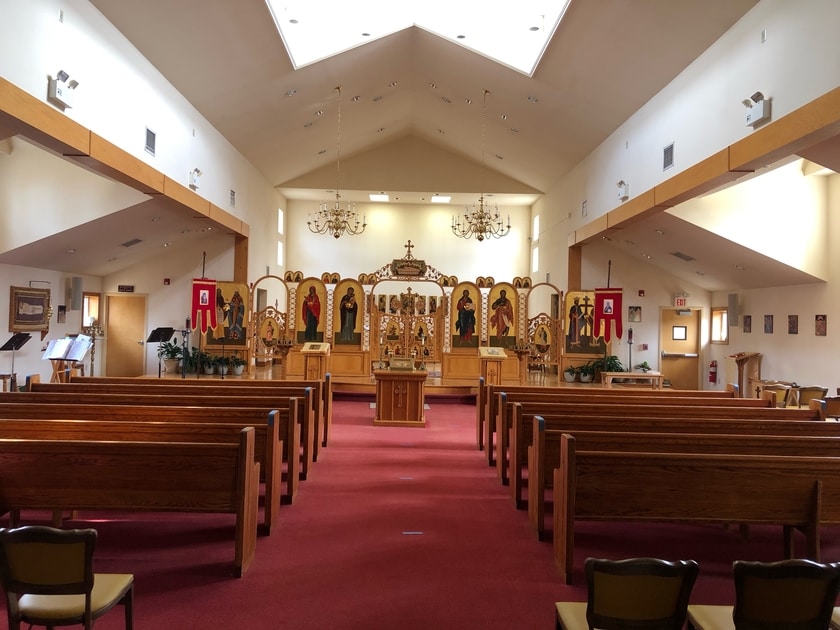 The Orthodox Church of the Holy Cross, located in Medford, NJ needed a new sound and streaming system.  Prior to our involvement, they were using a phone for streaming and had a pair of home theater loudspeakers for their sound system.  For streaming, they needed a permanently installed camera that could capture the entire Church and was easy to operate.  For sound, they needed even coverage front to back, and something that would work with their loud HVAC system.  They also wanted an audio/video system in their basement which could serve as both an overflow area, and separate meeting space.

We took laser measurements of the Church to begin our design.  From there, we created a layout of the systems to present to the Church.  Since the HVAC system was a major concern, we provided a demo of the proposed equipment to ensure that there would be no issues.  We lead with a PTZOptics PTZ camera on the back wall, which can be controlled by the Church’s laptop.  For the sound system, we have an iPad controllable mixer with simple presets.  JBL CBT columns mounted on the side walls provide great coverage and sound quality for the entire Church.

The new sound and sound and streaming system is easy to use and provides a high-quality experience for both in-person and virtual viewing.  The mixer presets allow anyone to have the system running easily, and the streaming setup provides clear video for live streaming and to the basement AV system.

With social distancing requirements, the Cape May Police Academy had to spread their recruits to an overflow classroom.  The issue they ran into was getting clear and reliable audio and video between each room.  They first tried using laptops with a conferencing app, but there were delays and lags which caused disruptions to the classes.  They needed a system that worked independently off of the network and would allow for clear two-way audio/visual communcation.

The system design accounted for the room sizes, and the need to have clear audio with no echo.  We designed the system around Shure’s MXA series microphone.  We selected the 4′ 710 model, which was mounted to the ceiling in the far classroom.  This allowed the instructor in the far classroom the ability to hear questions and comments from recruits.  The instructor wears a wireless microphone which broadcasts locally through the existing sound system as well into the far end classroom.  A QSC Core 8 Flex processor handles all of the routing and processing for the entire system.

The new system allows the instructor to hear questions and comments from the far end classroom, while the recruits in the far classroom can see and hear the instructor clearly.  The system is easy to use and requires minimal user interface.

Check out our other corporate and municipal projects for related systems. 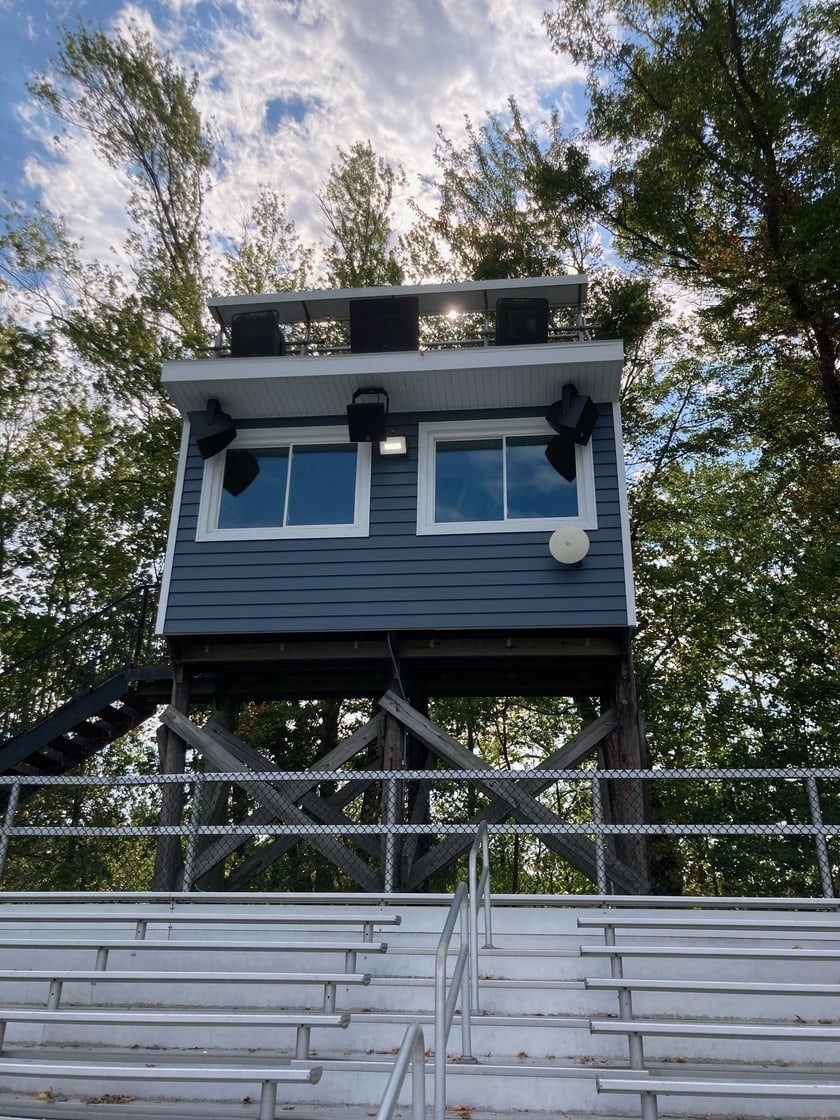 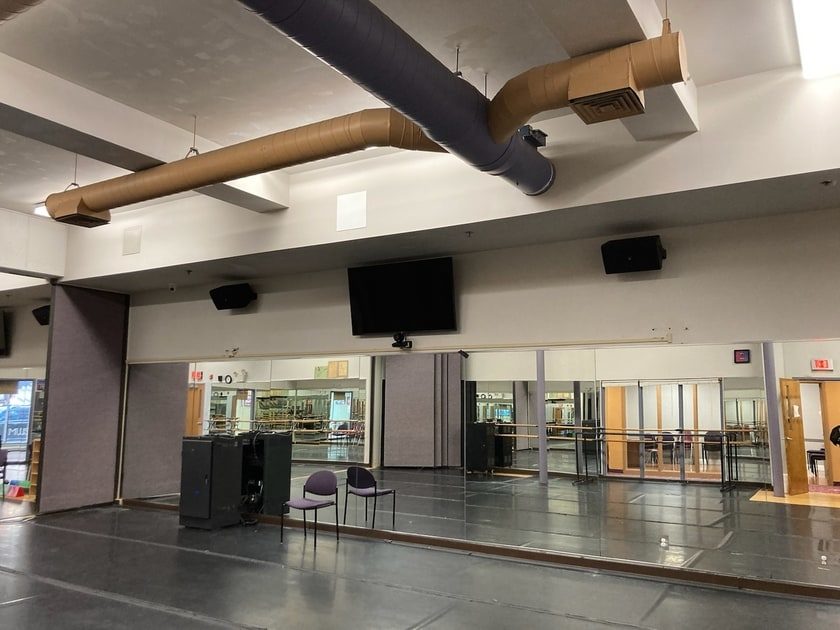 Dance studio sound systems require high-quality music reinforcement with good bass.  The existing audio system in the Christiana Cultural Arts Center featured older, small loudspeakers, and a paging amplifier.  Aside from the poor audio quality, the system was difficult to use.  They needed better sound, easier control, and connections for a laptop or phone.  They also needed headset wireless microphones for the instructors so they are not only heard in the studio but also on their virtual classes.

Our design team took measurements of the studio and noted the acoustics of the room.  Working within the school’s budget, they came up with a solution around JBL’s control-series loudspeakers.  We specified two loudspeakers per dance studio and included a mixer that would allow for independent or combined use of the audio system.  We also specified wireless packs with multiple headsets so each instructor would have their own microphone, and only share the bodypack.

The new dance studio sound system has been a huge improvement.  The music is crisp with deep bass.  The wireless microphone system connects to both the loudspeakers and laptops for virtual learning, and with the split design, each studio can operate independently, or combined.

In addition to this project, our team also installed a new audio/video system in the gallery and second-floor performance space.  Check the project out here.

Kingsway Baptist Church, located in Mickleton, NJ has been working with us to upgrade their sound and streaming systems for several years.   The overall objective throughout the projects has been high-quality sound and easy to use components.

Our design team took measurements of the sanctuary including the seating area and used computer software to determine the best loudspeakers for the space.  We lead with the EAW MK-series which are a two-way wooden cabinet.  We also used a smaller series from EAW for the monitors, which are also a wooden cabinet.  The design handles both speech and music and provides a very natural sound.  By using software, we were able to predict the coverage of the system before the installation, ensuring our solution worked perfectly for the room.  The QSC TouchMix mixer provided a simple interface, but with advanced controls that would allow for experience operators to make necessary adjustments.

The new sound and streaming system has been a huge improvement for the Church.  The mixer provides complete control of the microphones and audio sources, with simple scenes to recall all of the settings.  The loudspeakers provide even coverage and clear sound for the entire space.

The weight room audio/video system for Williamstown School‘s weight room had to provide high-quality audio and easy video playback.  Located in Williamstown, NJ – the school features full-size weight and fitness room located in the athletic wing, next to their gymnasium.

Our design team took measurements of the room to determine the best loudspeaker layout.  We reviewed connection locations with the schools, as well as the rack location.

We installed three surface-mount loudspeakers on the wall that provide coverage for the entire weight room.  A simple input plate allows athletes and staff the ability to plug in a phone or laptop, and a Bluetooth receiver provide wireless audio streaming.

Check out our other Athletic Venue Audio/Video Systems

Check out our other Weight Room Audio/Video Systems

Contact us for a free consultation for your audio project.

Benefits of Assistive Listening Systems in Churches and Houses of Worship

Why Live Streaming Your Church Services is a Good Idea